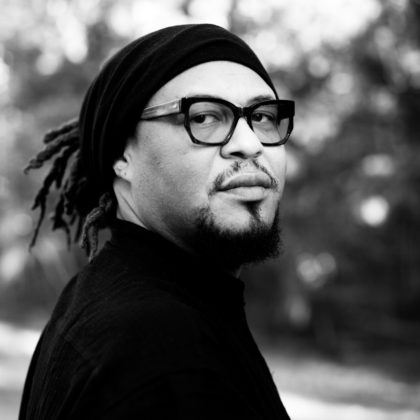 Since the release of his 2007 disc, The Timeless Now (CTA), Dayna Stephens has emerged as one of his generation’s most distinguished modern jazz tenor saxophonists and composers. He hones a sinewy yet supple tone, unfurling improvisations of great melodic ingenuity. As a composer, Stephens continues to build a multifaceted oeuvre ﬁlled with pieces that are cinematic in scope and incorporate suspenseful dialogue and interplay.

The New York Times heralded Stephens as a “must see,” saying, “Everything ﬂows with unusual ﬂow ﬂuency and makes you feel rewarded” regarding his improvisation. “When I’m playing, I’m really trying to make something new happen,” explains Stephens. “It often happens by playing unintentional notes. That leads me to somewhere. It’s always trying to come up with something singable.”

In collaboration with pianist Taylor Eigsti, a childhood friend, Stephens penned large-scale compositions for San Francisco’s Peninsula Symphony Orchestra. He also wrote big band charts for the Berklee College of Music and a wide-screen arrangement of Dave Brubeck’s The Duke for the Oakland East Bay Symphony, which premiered in 2013 at Oakland’s Paramount Theatre for its “Celebration of the Music of Dave Brubeck” concert.

On NPR’s A Blog Supreme, Eigsti said of Stephens’s compositional acumen, “Dayna has a way of using harmonic subtleties to create unpredictable emotions throughout his compositions and arrangements. The way he composes is genuine, and he puts his personality into all of his tunes. His beautiful energy as a human being comes through his compositions very vividly and honestly.”

Born in 1978 in Brooklyn, New York, Stephens grew up in the California Bay Area. While he cites his father, Rodney Stephens, for helping develop his love for music, it’s Elbert Bullock, Stephens’s maternal grandfather, whom he credits as being his ﬁrst music hero. Bullock played the saxophone professionally in the 1950s and it’s his sound that Stephens often aims to capture. “When I ﬁrst started playing saxophone, I encouraged [Bullock] to take out his horn for the ﬁrst time in a while,” Stephens recalls. “The ﬁrst thing I heard was this big, warm vibrato. That warmth is something that I’ve been chasing after ever since.”

Stephens began playing the saxophone at age 12 and eventually studied under noted saxophonist Dann Zinn, who imparted the wisdom of daily practice. As Stephens progressed, he enrolled in jazz programs at UC Berkley, Oakland’s Golden Gate Library, and the Stanford Jazz Workshop, where he studied under Kenny Barron. He also played with the Berkeley High School’s big band while picking up professional gigs with such local ﬁgures as pianist Ed Kelly and trumpeter Khalil Shaheed.

After graduating from high school in 1997, Stephens attended Boston’s Berklee College of Music on a full scholarship before enrolling in the Thelonious Monk Institute of Jazz (based in Los Angeles), where he studied with trumpeter Terence Blanchard, saxophonist Wayne Shorter, and pianist Herbie Hancock. Unfortunately, it was when Stephens ﬁrst embarked on his college studies that he was diagnosed with focal segmental glomerulosclerosis (FSG), a rare kidney disease. A determined Stephens, nevertheless, soldiered on and excelled at both music institutions.

Stephens now resides in Paterson, New Jersey and plays a lot in New York City’s jazz scene at such venues as Smalls, the Village Vanguard, and the Jazz Standard. He complements his performing with teaching at the School of Jazz at the New School in NYC, as well as at Stanford University, observing, “I get as much out of teaching as I do practicing, because it forces me to put all of my ideas into cohesive sentences that can be transferred to someone else.”