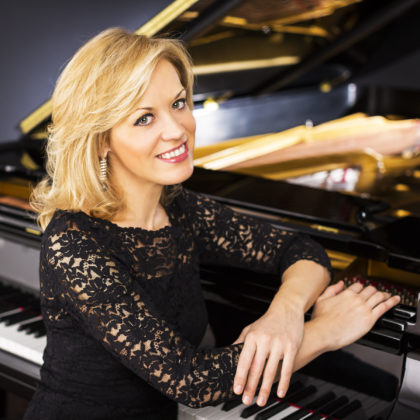 Pianist Olga Kern has established herself as one of the leading pianists of her generations. Born into a family of musicians, she jumpstarted her U.S. career with her historic Gold Medal win at the Van Cliburn International Piano Competition in Fort Worth, Texas, as the first woman to do so in more than 30 years.

Recent and upcoming highlights include performances with the Minnesota Orchestra, the symphony orchestras of Baltimore, St. Louis, Grand Rapids,Palm Beach, Colorado, Madison, Milwaukee , Austin and Toledo, the New Mexico Philharmonic, the National Symphony of Washington DC, the Iceland Symphony Orchestra, Hungarian National orchestra, the Nordwestdeutsche Philharmonie, the Orquesta de Sao Paulo, Academia La Scala, Concerto Budapest orchestra, Helsingborg symphony and the New West Symphony. In 2017-2018, she served as Artist in Residence with the San Antonio Symphony and went with the Chinese National Youth Orchestra on their tour to China. Ms. Kern has toured extensively in the United States with many international orchestras such as the Royal National Scottish Orchestra, the Royal Philharmonic, the National Symphony Orchestra of Ukraine, National Philharmonic of Russia, Warsaw philharmonic and many others. In 2019 she helped celebrate Leonard Slatkin’s 75th Birthday in a series of special concerts with the National Symphony at the Kennedy Center. She will appear in recitals and concerts in Orford, Sunriver, Fort Worth (Cliburn), Carmel, San Francisco, Dallas, Pecs, Budapest, Sicily, and Calvia. In the autumn of 2019, Olga Kern hosted her Second Triennial Olga Kern International Piano Competition. In the coming seasons, she will serve on the jury of many international competitions.

Ms. Kern’s discography includes her Grammy Nominated recording of Rachmaninoff’s Corelli Variations and transcriptions (2004), Brahms Variations (2007) and Chopin Piano Sonatas No. 2 and 3 (2010), the Tchaikovsky piano concerto with the Rochester Philharmonic, a CD of Russian composers including works by Balakirev, the Chopin concerto with the Warsaw Philharmonic and a CD of the Rachmaninoff cello sonata with Sol Gabetta. She was featured in several documentaries including the award-winning films about the 2001 Cliburn Competition, Playing on the Edge; “They came to play” and “Olga’s journey”. Visit Olga’s website-www.olgakern.com and follow her on Facebook (@olgakern and @olgakerncompetition), Instagram (kernolga) and Twitter(@kernolga1).