“From a tiny island to the opera and concert stages of the world.”

I had the good fortune to meet soprano Jeanine De Bique in September of 2002 when she was all of 20 years old. She had just arrived in the U.S. from Trinidad and Tobago to begin her musical journey at MSM. I was a theory professor at the time, and Jeanine was in one of my freshman classes. Her presence was instantly apparent but [it was not at all that of the stereotypical “singer diva” some might expect. She was a focused, no-nonsense, excellent student who was there to work. It became clear to me in a very short time that Jeanine was an exceptional artist/person who was on an unstoppable mission.

I recently spent a delightful hour with Jeanine reminiscing about her MSM experiences and hearing about her flourishing career. Being an orchestral and opera conductor now (I hung up my theory hat in 2006) it was a both fulfilling and touching to be able to talk about all things performing with Jeanine.

“I had so many shoulders to walk on to get me to MSM. I had a very powerful sense of responsibility with so many people having helped fund my education… I felt that there was no opportunity for failure.”

She was in the midst of a production of Monteverdi’s L’incoronazione di Poppea with Ivan Fischer and the Budapest Festival Orchestra at the time of our interview but was eager to talk with me about her MSM journey.  She recalled the amazing support she received: “When I arrived at MSM, it was not a time to find myself—that decision had already been made. So many people and communities had come together to support me at my fundraising concerts to help pay for my flight, the dorm room, my tuition.” Being twenty, she said, meant that she was two years older than her classmates and was ready to get to work—no time wasting here!

Her sense of self-worth and confidence was palpable but in a quiet way. Of course, we all have our moments of doubt and fear, so it made me smile when she shared that “when our American Airlines flight landed I was terrified to get off of the plane. My mother said it is too late for that and that we needed to get off the plane.” As they say, the rest is history.

I asked Jeanine how she came to choose MSM. “I saw brochures for many different conservatories and I loved the smiling faces in the MSM one. It looked like a community-based environment and it reminded me of my experience coming from a small country.” My own experience coming from Canada, while obviously a very different path, was similar in that MSM was the kind of school where you learned the names of people who worked there and you felt that you belonged in the school community.

As a child, Jeanine grew up in the southern part of Trinidad, studied piano, and took part in her school’s choirs. She competed in and won the solo voice category in the region’s music competition, “San Fest.” When she moved to the north she continued being involved in choir at school as well as semi-professional choirs. It was the new music teacher who had returned from studying voice at the Royal College of Music who encouraged her to focus on her solo singing. Her childhood piano skills still come in handy, however, when learning new roles!

Jeanine came to MSM to study with Hilda Harris, who she said was an excellent fit for her. She describes her as “a great teacher for me when I moved to the U.S., as she was grounding, loving, and caring. She advocated for me to grow and learn as much as I possibly could, including working with the late Warren Wilson of the Harlem Boys Choir.” She then studied with Marlena Malas for her Master’s degree and Professional Studies Certificate. Jeanine says that Marlena Malas’s style was unique in that “she was a precise teacher who knew exactly what she liked and didn’t like.”  It was important that her teacher was present in the opera world; it would help her as she completed her professional studies and began the next stage of her learning/career. “My student visa was coming to an end—do I stay in the U.S. or do I go back home?” was the question she asked herself. 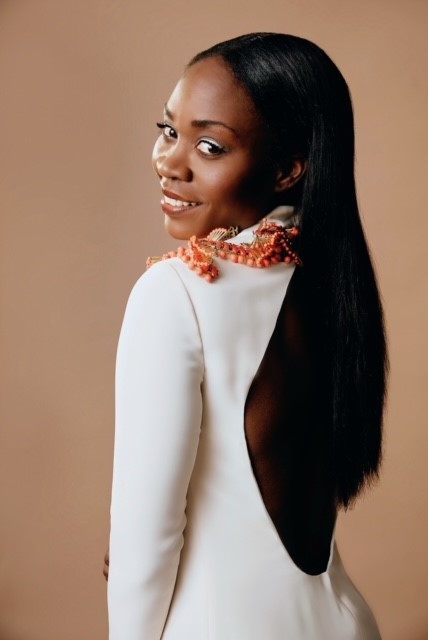 “Warren Jones is one of the strong points of my career, period. My love of recitals, my love of Lieder music started with him. He is the reason why I love Hugo Wolf songs and that they will forever be a part of my recital programs. Everything on my Carnegie Hall recital debut program I studied with Warren at MSM.”

At this point Jeanine’s post-MSM journey began in earnest. Theatre Basel (Switzerland) was invited to MSM to audition singers for their Young Artists Program and she was hired on the spot and spent a year in the program. She then won a competition in the Netherlands, which resulted in her signing with her agent—Sorek Artists Management of Berlin—with whom she has had a “great relationship” for the past ten years. Her next stop on her journey was apprenticing for a year at the Wiener Staatsoper, followed by Montpellier Opera and then the Royal Danish Opera. At this point, Jeanine says, “the work really began.” Notable performances including Salzburg drew added attention and she has not looked back since.

I asked Jeanine what she was looking forward to in the next five years. She is very excited about her newly released debut album Mirrors with Concerto Köln. She shared that she will be with the Paris Opera for the next two seasons and how thrilled and fortunate she feels to be making several debuts with them. She is excited to have a growing discography on the market, including three DVDs and her recent debut CD. She and her team are working on various concepts for a second album—all still in the secret stage! There are too many upcoming performances to list them all, but a few standouts include concert performances with the Vienna Philharmonic, Los Angeles Philharmonic, and Philadelphia Orchestra, as well as future productions with the Paris Opera.

“I am excited to see how my voice grows and what roles will be in my future. Baroque music is one of my loves, and it is important to me that my versatility as an opera singer also garners recognition. It is vital to me to bring a new sense of flavor and energy to whatever music I am performing.”

We could not end our engaging and laughter-filled chat without my asking “the question.” As with all great performers, every aspiring musician wants to know “what advice do you have for the rest of us?” Jeanine began her answer by stressing the basics, namely, that we each have our journey to follow and to work hard and never stop moving forward. She, like most of us, said there were times early on that she thought “this is not going to work because I do not have enough money to live on.” She recounted the time she auditioned for the MET Chorus because it paid $100,000 a year. Thankfully for the global opera/concert world the person in charge asked what the heck she was doing considering a chorus position and sent her on her way, thereby curtailing her chorus career trajectory. She stressed that “You have to learn how to manage your business—agents, managers, presenters, directors, conductors, coaches, pianists, opera houses, social media, and more.”

“It is absolutely crucial to have a very small team — two to three people — in whom you can confide, who will help you with your self-awareness, who will remind you to go back to your foundation of why you started doing this…to help you make the next choices and to not operate based off of fear. Do not be afraid to turn down things that are not good for you.… Take your time and make smart choices.”

Throughout the interview, Jeanine constantly stressed her gratitude to MSM for seeing her potential and believing in her. As a foreign student she was not allowed to work to earn money for expenses. She had a godmother in Brooklyn who would cook her dinner on the weekend and send her back to MSM with food for the week. During all of this, she was buoyed by the continuous support of the school through the crucial scholarships and the opportunities to sing while always learning and growing.Jeanine will be making her well-deserved Carnegie Hall debut on April 2nd with Met Opera accompanist Jonathan C. Kelly (MSM alum and faculty member) and, yes, there will be Wolf.On behalf of myself and President Gandre and everyone at MSM, Jeanine, we are so proud of you as we look forward to years of future artistic triumphs. You are a part of the MSM family wherever you go!