Luke (MM ’20, Contemporary Voice) and Adi (MM ’20, Jazz Double Bass) speak about their respective Student Projects in Performance Stay On It: Julius Eastman and M. Lamar and “I Want to Sing My Heart Out in Praise of Life”: The Kusama Suite on January 15 and 17.

The graduate students share the inspiration behind their projects, as well as the rewards and challenges involved with producing a professional performance.

Tell us about your student projects in performance.

Luke: My project in performance consists of two pieces. The first is by Julius Eastman, who was a queer black composer in the 1960-70s living in New York. Eastman’s music incorporates some jazz styles and non-Western formats which make it interesting and fun to perform. He also performed music written by MSM alumnus Arthur Russell back in the 1970s, so there’s a strong connection to the institution.

The second piece is by M. Lamar, who is another great queer black composer. M. Lamar does a lot of DIY, gothic, and aesthetic styles. In a way he’s a successor of Eastman, as they both worked in the queer underground space. Almost everyone in the Contemporary Performance Program is performing alongside me, which is great! It’s all open instrumentation, so basically anyone who wants to join in can come and play.

Adi: My project is a suite of original music based on the life and work of the Japanese artist Yayoi Kusama. You’ve probably seen her work floating around on Instagram—the photos of those crazy infinity polka dot rooms. The first time I saw her work was in 2017 here in NYC. I read her artist statement, and found it very moving. She shares that no matter what, she is going to continue creating until the day she dies, because its the only thing she can truly live off of.

When I saw her work I was blown away! I have synesthesia, which is where you can see colors in music, and her color palette is really similar to the one I see in my head. About a year after I saw the exhibition, I had a school assignment to write a programmatic suite of music with three parts, so I drew inspiration from Kusama’s art, and that served as the basis for this current project. Since then I’ve added three additional parts to the suite. I’ve tried to include more elements of her life into the story, such as incorporating her poetry into lyrics for the vocal part. 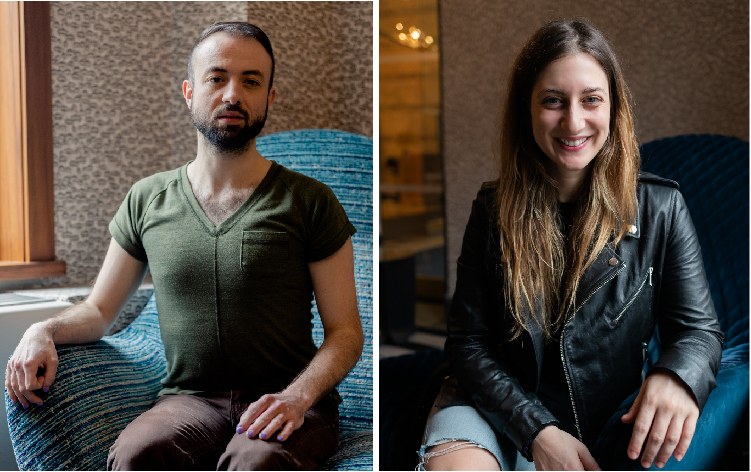 What have been the most challenging and rewarding aspects of your project?

Luke: There are so many tasks involved with organizing this performance. You’re not only worrying about the artistic aspects of the project, but also the operations of it all. You have to meet deadlines and work with various administrators and departments to make sure everything is in order. It really made me appreciate how much goes in to putting on a performance here, especially in Neidorff-Karpati Hall.

The most rewarding part of this is just knowing that I am capable of producing a large scale performance. I want to thank MSM for giving us these resources and guiding us through the process so that we learn what it takes to put on a professional production. It’s been wonderful to work with everyone here!

Adi: I agree, the logistical part of this was quite challenging. From a musical standpoint, it’s difficult to write something that fits together as one work, while still having enough diversity in each section so you’re not boring the audience with the same sound. Surprisingly, getting all eight musicians in the same room to rehearse has been the least challenging part of this, so I’m grateful for that. For me it’s been rewarding to push myself musically into places I wouldn’t necessarily go. I’ve been able to experiment with other mediums such as spoken word and samples. It’s been cool to work on creating a new sound and to shape my identity as a musician.

For me it’s been rewarding to push myself musically into places I wouldn’t necessarily go. I’ve been able to work on creating a new sound and to shape my identity as a musician.

What do you want the audience to take away from your performance?

Luke: With this project I’m really hoping to bring representation of queer people—especially queer people of color—into a classical space that doesn’t often recognize them. Being able to perform contemporary music while bringing in marginalized voices is very important to me.

Adi: Yayoi Kusama struggled with mental illness, so much so that she admitted herself to an institution. The art that she creates is said to be based on hallucinations she had as a child, with visions of polka dots all over the walls. That’s how she sees the universe and she’s creating it now for others to see the beauty of it. I hope that my music touches on these issues surrounding mental illness, because it’s definitely something that affects artistic communities like this one. Kusama’s main goal is to bring peace and comfort to others with her art, and I’ve tried to mirror that in my music.

What are your goals for the spring semester?

Luke: I’m in the second year of my master’s, so this is my last semester at MSM. My main goal is working towards my final recital before graduation. Overall I just want to keep consistently doing good work and have integrity with everything that I do.

Adi: I want to record the Kusama Suite properly, and put it out as a record. I hope to apply to a few grants with it to allow me to keep working on more music. For me, the hardest part of being in school is trying to balance it with my professional career. Right now I’m getting ready for a recital, recording my second album, and just trying to keep afloat in New York City.

Read more conversations about creativity, inspiration, and life at MSM.