The Concert and Placement Bureau (placement office) opens in May “to secure engagements for our gifted students so that they may have the encouragement and discipline of frequent appearances.” Appearing in recital at the School are Harold Bauer (pictured at the piano); Rudolf Serkin; the two-piano duo of Rudolph Gruen (pictured, middle) and Frances Hall; and one of the School’s first graduates, Dora Zaslavsky (pictured standing).

Alumnus Leander Dell’Anno joins the faculty, where he teaches piano and theory until 1975. In 1960 he became coordinator of the piano minor department and also acted as student advisor in the 1970s. Postgraduate department is formed. Courses are offered in conducting by Hugo Kortschak (pictured above); in ensemble by Harris Danziger, Dora Zaslavsky, and by Oliver Edel, Julius Shaier, and Rachmael Weinstock of the Roth Quartet; in scoring, arranging, fugue, and composition by Vittorio Giannini; and advanced dictation, ear-training, analysis, score reading, and keyboard harmony by Dr. Howard Murphy (pictured below). 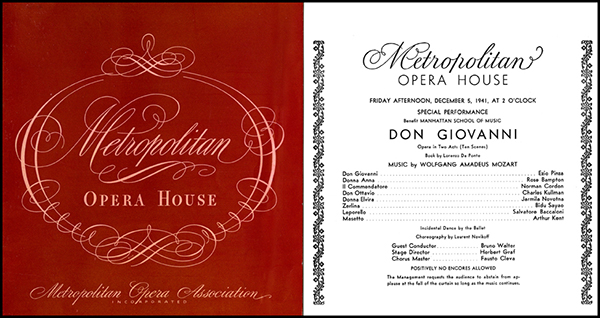 Conductor Leopold Stokowski attends a Manhattan School of Music orchestral concert. A communiqué from Janet Schenck to the members of the School’s orchestra following a concert mentions “all the very complimentary things Mr. Stokowski had to say … how delighted Mr. Stokowski was and that he could not say enough about the performance, the phrasing, and Mr. Kortschak’s leadership. He was also much interested in Miss [faculty member and alumna Ludmila] Ulehla’s composition.”

Monthly concerts for children are inaugurated at the Metropolitan Museum of Art. Friedrich Schorr (seated at piano), having just retired from twenty years at the Metropolitan Opera and with a great European tradition behind him, takes over the vocal department and Opera Workshop. Amendment to the charter authorizes the School to grant the bachelor of music degree.

Mr. Bertram Borden, a Trustee of MSM, gives a large endowed gift to the School in memory of his wife, who had also been a Trustee. Given through the Mary Owen Borden Memorial Foundation, it was the largest single gift the School had received up to that time. June 1 — Janet D. Schenck, the School’s director and founder, confers the degree of Bachelor of Music at Manhattan School of Music for the first time. She is assisted by Dr. Harold Bauer (pictured above, teaching at MSM).

Special classes are arranged to help the returning veterans. The School is one of two music schools in New York City, outside the universities, qualified by the government to accept returning veterans both under Public Law 346 (G.I. Bill of Rights) and Public Law 16 (Veterans Vocational Rehabilitation Law). John Lewis begins work toward a Bachelor of Music degree, studying theory, and will go on to earn a Master of Music degree in 1953. This same year, he joins Dizzy Gillespie’s big band and premieres his “Toccata for Trumpet” at Carnegie Hall in 1947. Lewis later works with Miles Davis’s nonet and founds the Modern Jazz Quartet. Composer Ludmila Ulehla completes her Bachelor of Music degree and joins the faculty, where she teaches until 2007.

Amendment to the charter authorizes the School to confer the master of music degree.

The School has 663 students. Nicholas Granitto joins the Academic Faculty where he teaches Italian and French until retiring in 1989.