The Business of Music: Anatomy of a Career is offered in the spring. Taught by Placement Director Richard E. Adams (MM ’61), it is the first course of its kind. Alexandra Honigsberg (BM ’81) writes: “When Richard came to the Placement Office he brought enthusiasm with him – and then he did the Business of Music class and I said, ‘Sign me up!’ and was not disappointed. He was practical, informative, and unfailingly positive. Our big project was to take a mythical string quartet on tour… so when I went on to be the tour manager for the band I was in as fiddle player, that was easy by comparison.”

At commencement, Margaret Hillis, founder and director of the Chicago Symphony Chorus, is featured speaker. She reminds students that it is talent, brains, and discipline that “gets one to Carnegie Hall.” While still an MSM student, Dolora Zajick (MM ‘83) wins the bronze medal at the 7th Tchaikovsky International Competition. (She is pictured here as the Principessa in an MSM production of Suor Angelica.) Prep students in the Grand Ballroom of the White House with First Lady Nancy Reagan.

In July 1982, students from Manhattan School of Music’s Precollege (then called the Preparatory Division) are invited to perform at the Reagan White House. Dianne Flagello, former Director of the Prep, writes: “One of our prep students’ grandfather was a very close friend of Ronald Reagan and he arranged for the White House to send a representative to hear us. As a result we were invited to perform a concert. Burton Kaplan conducted our chamber orchestra and I asked alumnus/violinist Elmar Oliveira, who had just won the Tchaikovsky Competition, to present us. It was quite a wonderful affair.”

Jazz studies courses are offered for the first time. October — Birgit Nilsson (pictured) teaches a master class, her first anywhere, before a specially invited audience, organized by Dean of Students Peggy Tueller. This begins a series of annual appearances at the School for the next several years. Jazz/commercial music major is announced with courses offered are towards a master’s degree. 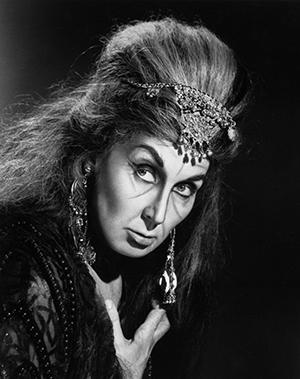 Dora Zaslavsky Koch, one of the School’s first graduates, is given an honorary doctorate for her 60 years of teaching excellence. (Pictured here with composer Virgil Thomson in her New York apartment.) Current faculty member Phillip Kawin (BM ’82 / MM ’85) writes: “Dora Zaslavsky imparted to me the limitless means of musical expression that are part of the tradition of the great masters. She was extremely instrumental in giving me the insight and necessary tools to communicate through the music. Dora is, and always will be, a guiding force and inspiration to me.” Jazz Orchestra wins its first Down Beat magazine “Outstanding College Jazz Band of the Year” award, for its first recording, Shades of Time.

A tribute concert is given in memory of percussion faculty member Paul Price, who had died in 1986, organized and directed by Claire Heldrich (MM ’72). The program included works by Richard Trythall, Lou Harrison, Lukas Foss, Frank Zappa, and John Cage (who was in attendance). The New York Times wrote: “One suspects that Mr. Price would have approved of this catholicity, of Ms. Heldrich’s splendidly efficient timekeeping, of the spirited, accurate performances, and of the enthusiastic audience that shouted itself hoarse.”

Chérubin by Jules Massenet is presented by the Opera Theatre in March. Susan Graham (MM ’87 / HD ’08) remembers: “The School gave me … opera performances that got reviewed in the New York Times and set me off on a very satisfying career journey. I am forever grateful to Manhattan School of Music.” (Pictured is Ms. Graham in the title role at MSM.)

Gunther Schuller (alumnus of the Preparatory Division) is awarded an honorary doctorate at the May commencement ceremonies.

Frances Hall Ballard, a member of the piano faculty from 1932–81 and benefactress of the music library, is given an honorary doctorate.

New recording facilities and a performance space are established in memory of Charles Myers (Class of 1965). Peter Simon, pianist and former director of academic studies at the Royal Conservatory in Toronto, becomes president (president until 1991).

The Honorable Richard Owen (Class of 1960) — a member of the Board of Trustees, a composer, and a U.S. District Judge — is given an honorary doctorate.

Marc Silverman (Class of 1983) is appointed chair of the piano department.